Headlines News
OED May Not Have Another Print Edition 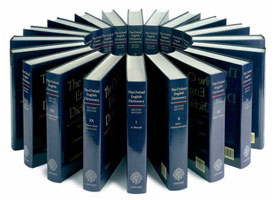 The venerable Oxford English Dictionary, often seen as the definitive reference for the language, will likely not see another print edition of the full work due to declining demand for the 23-volume set.

The first edition was first published in its entirety in 1928 after seeing separate volumes published starting in 1888. The second edition was published in 1989, which also saw the first CD-ROM version. In 2000, the publisher introduced Oxford English Dictionary Online, which is a subscriber-only model aimed at the education market.

A team of 80 lexicographers are preparing the third edition of the dictionary, which has a completion date of 2037. Updates of the dictionary are added to the online and CD-ROM editions every three months.

The second edition printed version (US$1,165) has sold approximately 30,000 copies since its publication in 1989 and weighs approximately 750 pounds. In contrast, the online version (US$295 per year of access) gets more than 2-million hits a month.