The top divisional winners of the 2013 OPIA Excellence in Print Awards included C.J. Graphics Inc. Printers & Lithographers and Metroland Media Group Ltd. Both companies are based in Toronto.
C.J. Graphics won the top award in three divisions, including Sheetfed, Digital and Specialty Printing. The Tempo Division of Metroland Media received the top OPIA award for Web Printing.
The awards were presented at the Mississauga Convention Centre on the night of May 22, which featured a keynote address from personal-finance guru David Chilton, who is best know for his books The Wealthy Barber (1989) and more recently The Wealthy Barber Returns. Chilton is also one of the panelists on CBC’s hit television series, The Dragon’s Den. 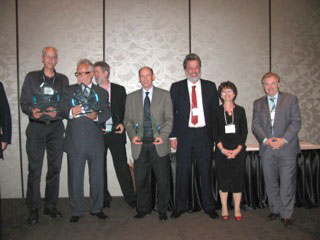