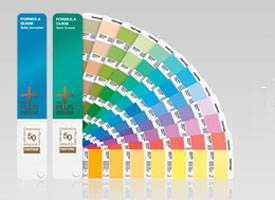 Pantone is celebrating the 50th anniversary of its Pantone Matching System with a special, limited-edition release of its Pantone Plus series of guides and books.
“In celebration of Pantone’s 50 years of colour inspiration, we designed special anniversary edition packaging and covers for the PANTONE PLUS SERIES,” said Giovanni Marra, director of corporate marketing at Pantone. “The PANTONE MATCHING SYSTEM® sparked a revolution in colour management and inspiration. We can’t wait to see how the PLUS SERIES shapes the next 50 years of colour.”
The origins of Pantone stem from a commercial printing company after employee Lawrence Herbert used his chemistry knowledge to simplify the company’s stock of pigments and production of coloured inks. By 1962, he ran the ink and printing division at a profit while the company’s commercial-display division faltered. He bought the company for $50,000 and the first Pantone Matching System for Printers was released in 1963.
Herbert soon got the majority of the ink producers he contacted to sign on to his system. In the mid-1960s, the Pantone system was adapted outside of the printing world for use in the design and artist markets. The company followed the desktop publishing revolution of the 1980s and remains a global standard today.
The limited-edition Pantone Plus Series guides and books feature metallic covers and a 50th anniversary logo. Additionally, the Pantone Formula Guide and Pantone Colour Bridge sets are packaged in a 50th anniversary gift box. The guides are available separately or part of value bundles.
Advertisement
Print this page