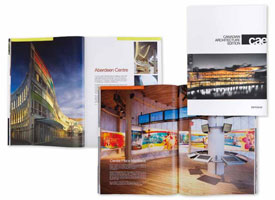 Montreal-based Pazazz Printing has won an award in Xerox’s Best-of-the-Best Program under the Books category. They are the sole Canadian company to win an award in this year’s contest.

The award was presented for the Canadian Architecture Edition Catalogue, which was produced on Pazazz’s Xerox iGen4 press, powered by a CX Print Server from Creo. The project was produced on Xerox Digital Colour Supreme Gloss 12 pt stock for the cover and Gusto Gloss 160gsm for the inner pages. Only 200 copies were commissioned, which explained the choice of Pazazz’s toner-based equipment over its offset workflow.

Xerox accepted submissions from around the world from its Premier Partners Global Network. The seven categories were: Books, Collateral, Digital & Offset, Digital Packaging, Direct Marketing, Photo Publishing and Transpromo. This year’s competition saw the addition of a Digital Trailblazer Award, which went to Keiger Direct of Winston-Salem, North Carolina for a cross-media campaign to drive enrollment at Salem College.

All award winners and their perspective case studies can be viewed on Xerox’s Website.