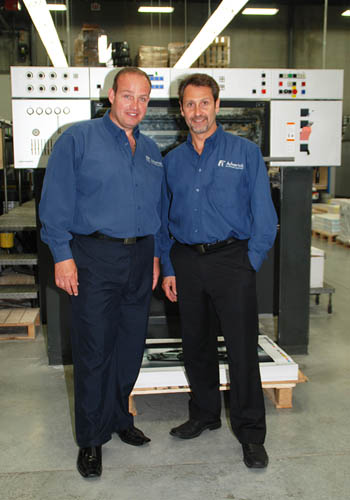 PrintAction sat down with the principals of Peel Graphics, which filed for bankruptcy in early August, and Advertek, which subsequently acquired some of Peel’s assets as part of its continuing growth strategy.

Peel Graphics, with locations in Brampton and Markham, Ontario, filed for bankruptcy on August 9 with total liabilities of approximately $6.6 million, of which around $4.8 million is owed to unsecured creditors. News of Peel’s closing sent shockwaves across Toronto’s printing community, which held the vast majority of Peel’s some 170 owed creditors.

Following a report by PrintAction about the bankruptcy filing, Advertek of Vaughan, Ontario, released a statement on August 20th that it had acquired assets of Peel Graphics. Advertek has purchased Peel’s 41-inch Heidelberg Speedmaster XL 105 press, various finishing equipment, and is currently in discussions with secured creditors to bring in more of Peel’s production equipment.

The Heidelberg XL 105 is scheduled to be installed sometime over the next month. It will replace Advertek’s aging perfecting press, circa 1998, which was purchased at auction following the bankruptcy of Allprint Ainsworth Associates, then a 34-year-old commercial printing company based in Kitchener, Ontario, in February 2010. Advertek also currently runs a 2005 40-inch, 6-colour Heidelberg CD 102 press with coater; 20-inch, 4-colour Heidelberg SM52 with coater; as well as an array of toner and inkjet production systems.

In addition to the asset purchase, Advertek also took on 35 former employees of Peel Graphics. “We have hired 85 percent of Peel’s staff, so from our point of view we have done something good,” says Simon Spina, co-owner of Advertek and Director of Finance. “We have kept people employed and we are going to continue to service Peel’s client base with the same level. So, we think we are doing something good for the community and for our industry, which has taken some major, major hits over the last five to 10 years. We will continue to reinvest and to grow and to hire.”

Andrew Cook, former President and a principal owner of Peel Graphics, has joined Advertek in a sales capacity. Susan Nyilas, who was also a principal of Peel and its former General Manager, moved to Advertek, as well. Peel Graphics was a generational family business for more than 40 years – tracing its roots back to 1933 with a local community paper. The company’s primary Brampton, Ontario, plant was focused on sheetfed-offset production with the XL 105 press, in addition to running a Xerox iGen4.

“We opened [Peel’s] Markham facility two years ago and I would call that a bit of a disaster. It took quite some time to get work going in the wide-format arena and it really caused a lot of problems for Peel Graphics,” says Andrew Cook. “At the Brampton location we really didn’t have a lot of issues, it was business as usual. The Markham facility was a big challenge for us.”

Peel’s Markham facility was focused on the production of wide-format graphics running an 80-inch-wide EFI VUTEk GS2000. The wide-format operation was led by VP Ron Morgan, former President of Acuity Solutions Group in Richmond Hill, Ontario, which closed its doors in June 2011. Shortly after the closure, Morgan began discussing the start up of a new wide-format operation similar to Acuity with Cook and Nyilas of Peel Graphics. The Peel Markham facility began in August of 2013 with several former Acuity employees, peaking with over 25 staff members.

Advertek is also one of Canada’s fastest growing printing operations. The company was founded 14 years ago. Spina and Joe Montalbano, Advertek’s Director of Sales, took ownership of Advertek back in 1999 and in late summer 2010 began construction on a new 30,000-square-foot printing facility in Vaughan, Ontario. The company generated annual revenues of $9 million at the time.

“Since mid-2010 we have grown about 20 percent,” says Spina, who attributes most of Advertek’s growth to the modern facility and focusing sales efforts on specific stable markets like financial, food and beverage, education, and mining. “We are in 12 different industries and we are not top-heavy in any one,” says Spina, “And we are not top-heavy with any one account, either. We have a real wide portfolio of accounts.”

Spina estimates Advertek’s mailing services have grown by around 400 percent since becoming part of the new plant in Vaughan shortly after it opened. Mailing is a service that Peel did not offer to its client base. “Peel was a good fit… We have mailing which they didn’t have and they are in the wide-format game, which we were not involved with,” says Montalbano. “The goal is to sell more to our existing clients and when we bring in new clients then we are able to get the lion’s share of their spend.”

Spina and Montalbano say they have been looking at expanding into wide-format for several months and now plan to run this service out of a 10,000-square-foot facility they recently took control of across from their existing plant. The new division is to be driven by the combined sales force of Peel and Advertek, who will also benefit from their shared expertise in sheetfed-offset work.

“We have been talking for quite some time about getting together and the synergies of putting the two print companies together in a difficult print market and it got pushed along a little faster by BDC,” says Cook. BDC, the Business Development Bank of Canada, is listed as a creditor of Peel’s bankruptcy filing for an unsecured amount of approximately $1.71 million and a secured amount of around $831,000. “It has been a terrible time, but I am very excited to be here. It is a great choice for the staff from Peel – most staff came over here – and I see great things in the future working with Advertek.”

Montalbano indicates Advertek’s future is to include continued growth through acquisition, based on a plan that he and Spina outlined at the very beginning of their 1999 partnership.

“When we first bought the company we had it leveraged pretty high, but we had some immediate growth that took place to support the leverage concept and it has paid off for us,” says Spina. “We are positioned very well at Advertek from a balance sheet point of view. A lot of our competitors have a lot of debt, but we don’t. Our plan was to get to a point where we had a clean balance sheet that would allow us to take advantage of the consolidation happening in the marketplace.”