Located just south of the Calgary International Airport, in the Airways Industrial Park, Active Bindery has installed a new Standard Horizon BQ-470, with production speeds of up to 1,350 cycles per hour. 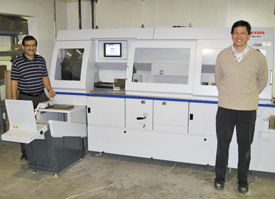 The 4-clamp BQ-470, which binds books up to 2.55-inches thick, features interchangeable EVA/PUR adhesive tanks. At the most recent On Demand tradeshow, held in March 2009, Standard Horizon introduced two new accessories to the perfect binder.

First, a new PM-470 pre-melt tank allows for longer runs before adhesive replenishment and, second, the SI-470 digital caliper to measure book thickness (data is automatically transferred to binder for set up).