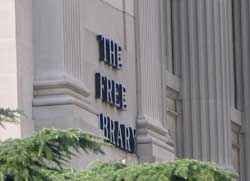 After The Free Library of Philadelphia threatened to shut down all 54 of its facilities on October 2, a new vote by the local legislature will result in the needed funds reaching the system, which traces its roots back to Benjamin Franklin and the year 1731.

The vote in the Pennsylvania State Senate was far from unanimous, however, as bill 1828 was finally passed by a
positive margin of 32 to 17.

“For all of you who have been following the saga over the city’s budget crisis, this is the legislation that was needed for the City of Philadelphia to avoid the Doomsday Plan C budget scenario, which would have resulted in the layoff of 3,000 city employees and forced the closing of all libraries,” reads a statement from The Free Library.

“We are enormously grateful to everyone who advocated on our behalf. Thousands of letters to state legislators were collected from our libraries, and countless others made calls and sent emails underscoring how important public libraries are to the economic, educational and social life of our city.”