Last week, 25 students celebrated graduation from the Eva’s Phoenix Print Shop program, which, now in its ninth year, moved into an expanded production facility in June 2010.

The program’s new facility measures just under 7,000 square feet, after Eva’s Phoenix, which works with at-risk youths, signed a $1 lease agreement with the City of Toronto to expand into a neighboring warehouse.

The evening celebrations also included naming this year’s winning design entries in the annual greeting-card competition, from which proceeds are used to support Eva’s Foundations of Print training program. James Lee took first place in both the Holiday Greeting Card and Year Round Card categories. 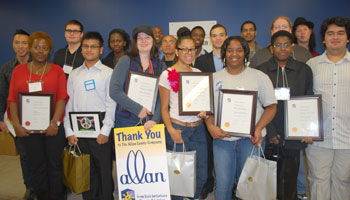