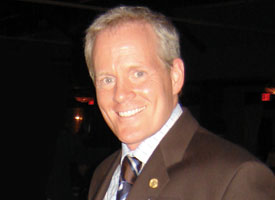 Michael Makin has declared victory over Google’s Go Paperless 2013 campaign after his letter to the Google executives has caused them to remove a misleading slogan of “Save money. Save time. Save trees.”
In Makin’s initial letter to Google, he described how the printing industry is at the forefront of sustainability efforts and that printing is the only medium with a one-time carbon footprint, whereas electronic devices require the mining and refining of numerous materials and non-renewable resources. “We all must do our part to respect the environment, but pitting one segment of the communications spectrum against another is not the right way to achieve this goal.”
Below is the newly released letter to the PIA membership about how it has changed the Google campaign:

Dear members,
It may have taken months, but I am pleased to report that as a result of the protest by Printing Industries of America—along with other groups such as Two Sides—Google has corrected its misleading claims made as part of its ill-conceived Paperless 2013 campaign. While the campaign to reduce office paper use will continue, its offensive tag line “Save money. Save time. Save trees” has been eliminated!
You may remember that in January this year, I sent an open letter to Google CEO Larry Page and Chairman Eric Schmidt, challenging Google on this offensive initiative. It appears our protest did not fall on deaf ears.
Misconceptions like these are common in our industry, and that is why Printing Industries of America has spent time and resources putting together The Value of Print campaign, a tool that can be used to dispel many misconceptions about our industry.
The Value of Print Flip-Book and its accompanying mobile app can be used to give responses to the common misconceptions about print, promote its effectiveness with statistics, discuss the importance of the printing industry and its large economic footprint, and refer to additional websites for more information.
I want to thank Messrs. Page and Schmidt for reconsidering the message of the Paperless 2013 campaign. This is just one more victory for our industry, but we can’t sit back now. I am encouraging everyone to view a copy of the Flip-Book by visiting www.printing.org/valueofprint and to help spread the true message about print. And don’t forget to download the app, available for Apple, Android, and Blackberry users.
Sincerely,
Michael Makin, MBA
President and CEO