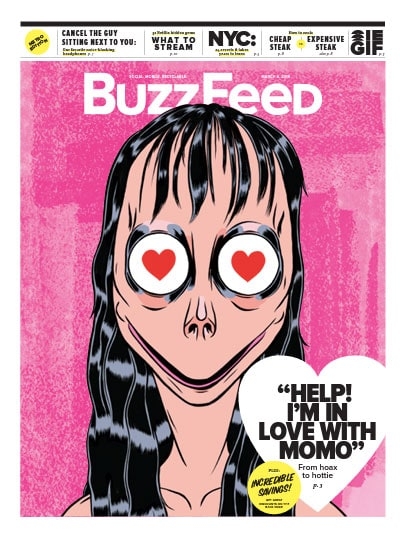 For one day only, BuzzFeed pivoted to print publishing. On March 6, the digital media company – known for its quirky ‘listicles,’ pop culture quizzes and investigative reporting – went retro and handed out 20,000 newspapers at Union Square, Penn Station and Herald Square in New York.

“BuzzFeed, a company that was born on the Internet and social media, is testing a new technology called print and unveiling a one-time, special edition BuzzFeed Newspaper, showcasing the latest news stories and favourite BuzzFeed content in an easy to consume mobile format. Fans all across New York will be able to check out the must-read stories without ever needing Wi-Fi,” it playfully announced.

With content from various sections across the company, the paper’s cover story delves into the whirlwind obsession over the Momo Challenge, a viral hoax that first came to light last July and recently resurfaced in Canada in February. Also featured in the 12-page newspaper are a New York City knowledge page, instructions for cooking cheap and expensive steaks, and a printed gif of Glenn Close at the Oscars, detailing her reaction frame-by-frame to Billy Porter’s red carpet outfit. “Confident @BuzzFeed is the first outlet to print a gif in a newspaper, we are rocket scientists,” Tom Namako, Head of Breaking News at BuzzFeed News, tweeted.

“It’s a print edition of some of the best stuff we’ve done over the last few weeks with a great cover story on a classic Internet phenomenon by Katie Notopoulos, which is that in the course of a week, Momo went from this kind of terrifying Internet figure to a debunked hoax, to the subject of people making fan art and falling in love with her,” BuzzFeed Editor-in-chief Ben Smith explained, as he doled out copies of the one-off paper at Union Square. “It’s kind of an attempt to do the Internet in print, in fact.”

The back page is devoted to advertising, and BuzzFeed says it will track the advertising coupon codes to see how well the newspaper performed.

At a time when brands are cutting back on their print components or shuttering them completely, why are others – particularly those born and bred online – moving into the print realm? In recent years, Airbnb, Dollar Shave Club and Net-a-Porter, among others, have all launched their own print publications. Airbnb and Hearst Magazines in May 2017 launched Airbnb Magazine, which echoes the adventurous spirit of Airbnb and celebrates the “experiences made possible when we are open with each other and curious to explore the world — and ourselves.” Last summer, Facebook quietly introduced Grow, a quarterly print magazine in the U.K., for business leaders and executives. The print product is now being distributed for free in select airport and train business lounges.

A matter of trust, a November 2017 study by media buyer MediaCom and Magnetic, a marketing agency for consumer media, finds magazine brands are more trusted than social media brands: 70 percent of magazine readers trust magazines, but only 30 percent of social media users trust social media. For digital natives under the age of 35, the split is 62 percent and 35 percent, respectively.

“Building brand trust is in large part down to product and service experience; however, media can play a role in delivering trustworthiness, or a perception of trust,” MediaCom and Magnetic say. “There is a ‘brand rub effect,’ trust in a magazine brand translates into perceptions of trustworthiness for brands who use this environment. Across a basket of campaign effectiveness studies and a range of trust-based metrics, we saw an average percentage KPI uplift of between 64 percent and 94 percent per brand.”

The study used three different ways to measure trust: a single direct question, factor analysis to capture the nuances of trust, and implicitly to account for subconscious perceptions.

“There’s been a bit of a wake-up call in the last 18 months in terms of people’s disbelief around fake news and their worries that what they’re being sent and sold and reading is not real,” Magnetic CEO Sue Todd said in a July 2018 interview with The Drum. “People’s response to that is to be a bit more diligent, and that means they’re looking towards the most trusted channels.

“The thinking is: if there are challenges around the trust in our content and our brand, then a magazine, a printed magazine, is a good way for us to change that conversation and build more trust.”

In what often seems like an increasingly digital-centric world, it’s clear that multi-channel campaigns that leverage the innate trust of print with the accessibility of digital will be the most effective way to engage with today’s audiences.

This editorial was originally published in the April 2019 issue of PrintAction, now available online.