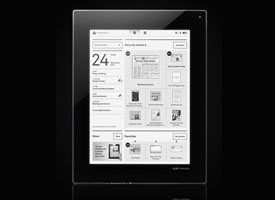 E-ink manufacturer Plastic Logic has announced it plans to release a colour version of e-ink technology by 2012. While e-ink is still in the process of gaining mainstream adoption, monochrome versions of the technology are currently being used by dozens of eReader devices, such as the Amazon Kindle and Sony Reader.

According to Electronics Weekly, Achim Neu, Director SCM at Plastic Logic, speaking to the International Electronics Forum 2010 in Dresden, announced: “We have built a colour display and it is working at our Cambridge laboratory.”

Unlike the traditional LCD technology used by the iPad, colour e-ink only requires power to refresh the screen. E-ink screens also generally fare well under direct light, unlike LCDs, making it ideal for replicating a print experience. Plastic Logic is launching a business-focused monochrome device this June called the QUE. The company is producing readers from its new $100-million factory in Dresden.