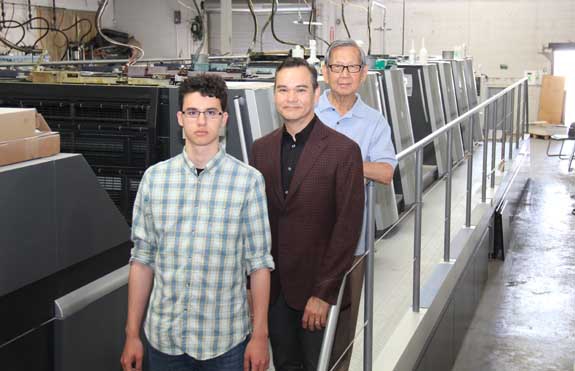 PointOne Graphics of Etobicoke, Ontario, continues to expand its technological base with a range of new installations like a perfecting Heidelberg Speedmaster XL 106, two Suprasetters, a Ricoh Pro C901S, Vivid UV coater and a new MIS.

The full-size sheetfed presses are fed via Magnum roll-to-sheet machines, which PointOne began to use around six years ago. The Toronto-area printing company recently opened up a separate 22,000-square-foot warehouse nearby to receive paper shipments by rail. The high-ceiling facility in mid-June was holding approximately 6-million tonnes of paper.

A new Ricoh Pro C901S press, installed two months ago, joins an existing Ricoh Pro C901 that has been on PointOne’s production floor for a year and a half. Both systems are set up with modules for inline finishing. The newer machine is equipped with a Plockmatic BK5010 booklet maker, adding the ability to do three-sided trimming and much thicker perfect-bound jobs, in terms of both page counts and stock weight.

PointOne is also continuing to rejuvenate its postpress department, which today includes equipment like a Heidelberg Stitchmaster 450, installed about six months ago, a new automatic Polar cutter and Duplo technology, among a range of longer serving finishing systems.

The two new Heidelberg Suprasetters, also installed two months ago, replace Kodak CTP systems that have been running for around a decade. They primarily image Fujifilm LH-PJ plates produced with Kodak Prinergy workflow. PointOne is continuing to integrate its entire shop through the recent installation of an EFI Monarch Management Information System.