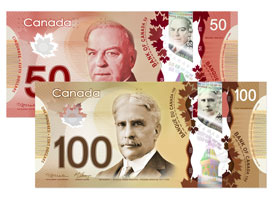 A new series of Canadian currency will debut starting in November. Unlike the cotton-paper money previously released by the Bank of Canada, the new series will be printed on a plastic polymer.

As reported by PrintAction in March of last year, the new series of bills contain heightened security features which make them more difficult to counterfeit, yet easier to check, most prominent of which are two transparent areas on the bill.

“The Bank’s objective with every new series is to produce a bank note that Canadians can use with the highest confidence,” said Governor Mark Carney. “The Bank is combining innovative technologies from around the world with Canadian ingenuity to create a unique series of bank notes that is more secure, economic and better for the environment.”

The first bill of this new series will be the $100 note, which will feature Sir Robert Borden, Prime Minister of Canada between 1911 and 1920, as well as images of Canadian innovations in the field of medicine. The bill was shown to the public for the first time this week.

“These bank notes evoke the country’s spirit of innovation, and their designs celebrate Canada’s achievements at home, around the world and in space,” said Minister of Finance Jim Flaherty. “Bank notes are cultural touchstones that reflect and celebrate our Canadian experience.”

The $50 bill will feature the Canadian Coast Gard Ship Amundsen in the Arctic as well as William Lyon Mackenzie King, Canada’s longest-serving Prime Minister. The $20 note will feature the Vimy Memorial in France to signify Canada’s sacrifices in military conflict, with a portrait of Queen Elizabeth II. The $10 bill celebrates Canada’s railroad heritage, with a portrait of Sir. John A. Macdonald. Finally, the $5 bill will have the Canadarm2 and Dextre to symbolize the country’s contributions to space exploration. It will feature a portrait of Sir Wilfrid Laurier.

The $50 note will be issued in March of next year, followed by the $20 note at the end of 2012. The series will be complete with the $10 and $5 bills in 2013. The bills are expected to last 2.5 times as long as the current bills, saving the government at least $200 million over the bill’s eight-year lifespan.