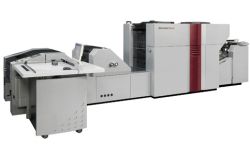 Presstek announced today at PRINT 09 that its aqueous coating-enabled DI press will be available immediately. According to company representatives, the aqueous option is a hotly anticipated feature for DI. The sale of the first 52DI-AC has gone to Quad Graphics.

Jeff Jacobson, president of Presstek, spoke to journalists about the company’s direction in the near future, including the development of a 75-format DI press, which would not share the traditional DI’s central-impression design, instead moving onto a conventional modular tower layout. The 75DI is scheduled for deployment by IPEX in May 2010.

Jacobson also announced a new low-chemistry plate called the Aeon, which features run lengths of 200,000 and up to 1 million if baked. The Aeon is a positive writing plate that can be imaged on 830nm CTP systems and can hold 1-99% dot at 200lpi.

The company also announced the immediate availability of its UV option, which can be equipped either on new presses or as a field upgrade for 52DI or 34DI owners. The upgrade supports hybrid rollers, allowing users to switch between UV and conventional inks, even though the company claims the majority of its users will go exclusively UV.