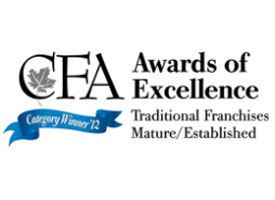 Print Three Corporation has won a Silver award at the 2012 Canadian Franchise Association National Convention. The company was awarded under the Traditional Franchises: Mature/Established category.
The CFA Awards Program recognizes excellence in franchise operations. Pizza Nova received the Gold award in Print Three’s category, while the Maaco chain of automotive body repair facilities received Bronze.
“Receiving the CFA Award of Excellence in Franchising is a true honour and testament to our ongoing efforts as a franchise organization,” said Andrew Hrywnak, President, Print Three Franchising Corporation. “As a print franchise we have always prided ourselves in researching and developing advanced and leading-edge solutions to differentiate Print Three from the competition, as well as market and support our franchisees in their businesses. This award further reinforces that we have been on the right path for the last 30 years and we will continue to advance in this direction.”
Print Three operates 51 franchise locations in six provinces throughout Canada and has been in business since 1970.
Advertisment
Print this page