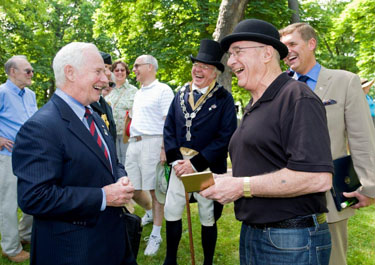 Art Ellis, who is a board member of the Mackenzie Printery and Newspaper Museum in Queenston, Ontario, designed a commemorative medal to be handed out to dignitaries during the upcoming bicentennial to celebrate 200 years of peace after the War of 1812.

A call for medal-design submissions went out in December 6, 2011, through the Niagara 1812 Bicentennial Legacy Council and Medallic Art Society of Canada. According to the Medallic Art Society’s Website: “The art medal was born in the period of the Renaissance, primarily with artist Antonio Pisano or Pisanello (c.1390–1455)… Aristocrats and wealthy patrons saw to it that the medal became a symbol of achievement. Tradition established that a specially designed medal was given as a sign or record of recognition to honour or reward one person or a group of individuals.”

In late-June, a ceremony was held to recognize Art Ellis for his winning design, which included a $1,000 reward for the copyright, while a runner-up received $500. All submissions will be showcased at the Rodman Hall Art Centre at Brock University until August of 2012. 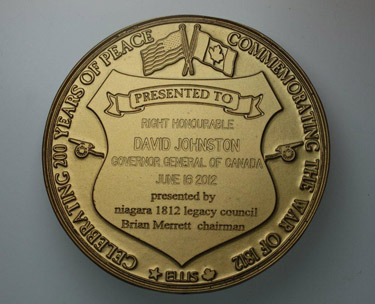 The Niagara 1812 Bicentennial Legacy Council is a cross-border, not-for-profit organization established to commemorate the War of 1812. The organization is planning to celebrate the 200 years of peace between Canada and the United States over the next three years. Upcoming events are listed on a dedicated Website produced by the Legacy Council.

The Mackenzie Printery and Newspaper Museum is open to visitors between May 5th and September 3rd between 10am and 5pm daily. More information can be found at www.mackenzieprintery.org