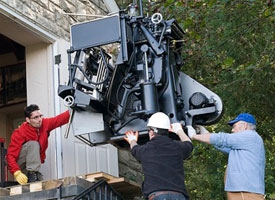 The Heidelberg T platen, which established Heidelberg in the press-making world, began production in 1914. Howard’s donated T Platen, with a 10×15-inch format, was made in 1974 and then imported to a distributor (Sears Company) in Canada. Howard has owned the fully reconditioned press since 1984.
The Printery Museum is located in Queenston, Ontario, in the home of the 19th Century editor William Lyon Mackenzie and is Canada’s largest working printing museum.
The Mackenzie Printery and Newspaper Museum will be holding an Introduction to Letterpress seminar on November 19. Interested parties can contact Harold Meighan at (905) 684-7672.
Below are a few photos, courtesy of Denis Cahill, taken during the installation of the new platen press. A crane swung the press from the truck onto the back porch and steel pipes were used as rollers as the crew maneuvered the heavy machine into place.