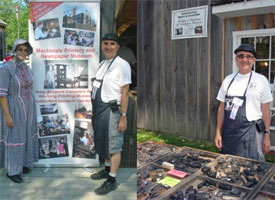 The Mackenzie Printery and Newspaper Museum made an appearance at this year’s Marshville Heritage Festival in Wainfleet, Ontario. As part of Labour Day weekend’s festivities, members of the Mackenzie museum held demonstrations for children in the art of letterpress printing.

The village of Wainfleet (called Marshville in the 1800s), with its population of 6,000, annually hosts more than 25,000 visitors during its festival, which includes restored buildings from the 19th century as well as well as live demonstrations of a working sawmill and working blacksmith shop.