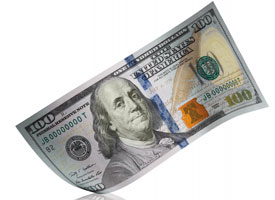 The new U.S. $100 bills hit another setback as it was discovered a mashing problem would require 30 million bills to be reinspected.
The Bureau of Engraving and Printing has announced that too much ink was applied to some notes. The notes will be returned and inspected, with problem notes destroyed.
The new $100 note has already faced two delays, originally supposed to circulate in early 2011. The first edition left some notes with a blank spot while the second batch was stolen enroute to the Federal Reserve. The new series of notes started in 2003 with the launch of a revised $20 bill. New $50, $10 and $5 notes followed in 2004, 2006, and 2008 respectively.
The new note features 3-D security features and is produced in two facilities in the U.S.: one in Fort Worth, Texas, and the other in Washington D.C. It was the Washington plant which produced the flawed bills, causing the Fort Worth facility to step up production.
According to CNN, the printing error could cost American taxpayers upwards of $4 million. The amount of affected bills total less than one percent of bills produced. Each bill costs 12.6 cents to produce, up from 7.8 cents of the older design.
The new $100 notes will be released on October 8, of which an estimated two thirds will then be used outside of the United States.
Advertisement
Print this page