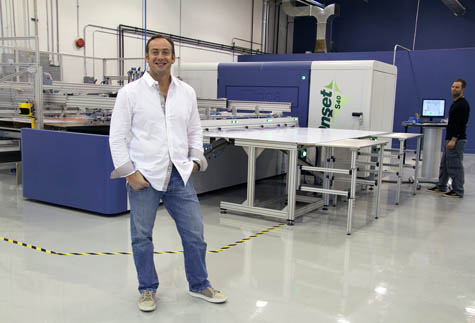 Proprint Services of Toronto, which focuses on large-format point-of-purchase production, announced its installation of Canada’s first Inca Onset S40, which has been in production for nearly six months.

While specializing in POP displays, Proprint also provides graphic design, prototype development, kitting and distribution services, as well as traditional large-format litho production. The company has been in operation for over 20 years. Prior to installing the Onset S40, Proprint would produce its larger POP jobs on a litho press or via silkscreen systems.

“Before, it would take us 12 minutes to run a 4 x 8-foot sheet on our other flatbeds,” explained Richard Krakower, President, Proprint Services. “With the Onset S40 it takes just 50 seconds to run a 5 x 10-foot sheet. So if we had 40 sheets to print… you can just do the math. When we had a 200-sheet job, it would take forever to complete, instead of just one shift. Trying to get the work out was a balancing act, requiring jobs to be moved around from litho to digital. With the Inca Onset S40, we are producing jobs 50 percent faster, at a minimum.”

The Onset S40, exclusively distributed by Fujifilm on a global basis, is a flatbed inkjet system reaching a maximum speed of 470 m2/hour, which equates to 94 full beds – handling a 5 x 10-foot sheet. Printing on substrates up to 50-mm thick, the Onset S40 comes as a standard CMYK configuration but can installed, as with Proprint, in a 6-color configuration, including light cyan and light magenta.

Proprint’s Inca Onset S40 is also fitted with an automation system that allows the company to operate in manual, semi- or three-quarter automation from the same configuration.  “Our other flatbeds couldn’t print corrugated well,” added Krakower, when describing the Onset’s size and substrate flexibility. “Now printing on corrugated looks just as good, if not better, than printing on 100-lb gloss paper.”

In conjunction with its Inca Onset investment, Proprint also purchased a new Esko Kongsberg XP Auto finishing table, with a 63 x 126-inch bed. This is also a Canadian-first installation.