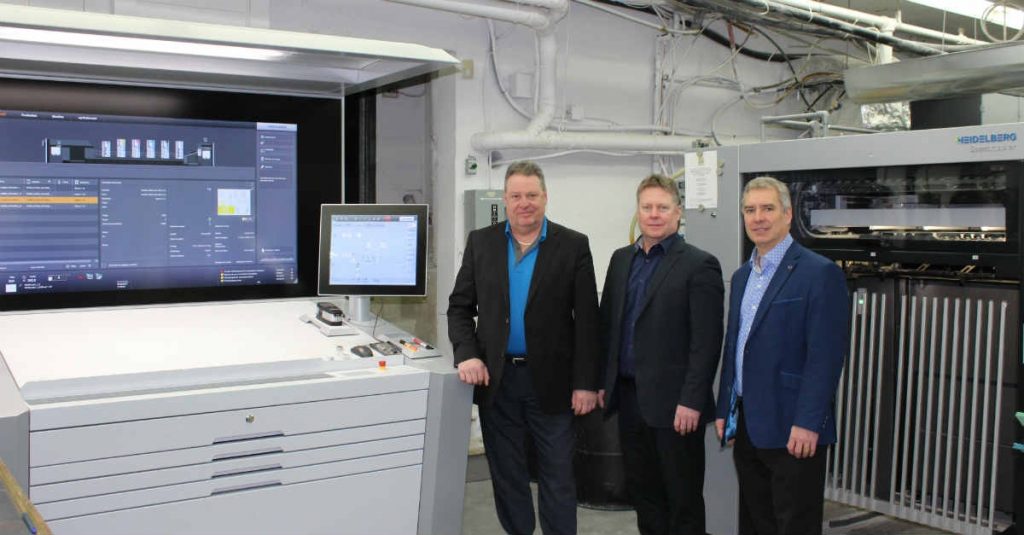 Deschamps Impression of Québec City, Québec, began the New Year with the acquisition of another of the province’s best-known commercial printing operations in Imprimerie Litho Chic. With this acquisition, Deschamps will have more than 200 employees and increase its annual sales to more than $33 million.

The Litho Chic acquisition compliments a year of capital-equipment investment by Deschamps. In May 2016, the printing company bought a new Xerox iGen5 press, as well as binding and finishing equipment for its Montreal plant. In December 2016, Deschamps Impression expanded its Québec City facility by almost 5,000 square feet. In January 2017, the company is installing a brand new 5-colour Heidelberg CX-102 press in its’ Quebec City facility.

Founded in 1987, Imprimerie Litho Chic specializes in commercial work with both offset and digital printing systems. Jean Bilodeau and Michel Leclerc of Litho Chic will continue to play key roles within the Deschamps Impression organization. On top of high-end commercial printing, Deschamps Impression focuses on providing clients with prepress services, security and digital printing, as well as pharmaceutical and cosmetic folding-carton and box printing, in addition to bindery and finishing services. PrintAction spoke with President Jean Deschamps about the company’s most recent acquisition.

What is the status of the acquisition?

JD: We are planning to complete the merger of the two companies by mid-March. We acquired them in December and we are going to move staff and part of the equipment in February. They are going to be consolidated in our main plant in Quebec City.

Was this a share purchase, rather than an asset purchase?

JD: Yes it was – We were looking to increase our sales volume and with this acquisition we have gained almost $5 million in additional sales which is very interesting.

Does Litho Chic provide a different sales base for you?

JD: I would say it is complimentary because a good portion of their customer base is close to Montreal rather than Quebec City where we are based but with our manufacturing site in Montreal we are able to integrate the additional volume across our platform. This is one of the major interests we had at that time because if they had exactly the same customer as us, we would not have bought the company of course.

What else attracted you to Litho Chic?

JD: The customer base, as I mentioned, as well as the craftsmen who were working in the facility. We are transferring more people who are very talented, people who have a lot of experience in the printing industry as there are not a lot of new people who are coming into our industry.

What Litho Chic assets are you taking in?

JD: We will be transferring mainly finishing equipment. The presses and prepress/platemaking equipment are going to be sold because we just bought a brand new Heidelberg CX Speedmaster [being installed at the time of the interview]. That press is going to increase our productivity by about 40 percent more than the old CDs that we had. We are going to be able to take all of Litho Chic’s $5 million in sales on this equipment.

Why were you attracted to Heidelberg’s CX press?

JD: It is a 40-inch CX with great new technology. It runs 16,500 sheets per hour easily with the Autoplate, auto-register and all of the new features we wanted for its’ efficiencies. Make readies take about 10 minutes compared to the 2005 press that we moved out, so we increased our productivity significantly with this press and we are going to be able to take in all of the additional sales that are coming from Litho Chic. We are going to add other shifts on the other presses, so with that we should easily cover the entire new customer base that we are getting.

Why did you recently put in a Xerox iGen 5?

JD: We bought the press in May 2016 and it was installed in our digital facility which is part of our manufacturing site in Montreal. The press fills a short run gap and has incredible flexibility with its 14 X 26 format as well as a print finish almost identical to offset technology.

Will the CX be used more for packaging?

JD: We are moving forward also in the packaging industry. We are doing a lot of packaging, a lot of gluing, inside of our facility in Quebec City and that was part of the purpose of buying that press. Now we have three five-colour CDs that are fully equipped. The oldest press that we now run is a 2010 and our equipment, all Heidelberg, runs right up to our new 2017.

When did you start focusing on pharmaceutical and cosmetic folding-carton printing?

JD: It is relatively new – I would say maybe four or five years now and we are increasing our market share steadily through our qualified and knowledgeable sales force. We hope to make an acquisition in this market segment within the next two years.

Why does Deschamps Impression have a significant position in security printing?

JD: We are positioned as one of the oldest family-owned security printing companies in Canada, with 90 years this year. We do birth certificates, lottery games, gift certificates, as well as manufacture cheques. We are one of only two printers with a federal security classification. Security printing is the foundation of our company as we only began commercial printing in the 1980s. We do a lot of security documents that are produced for different countries as well as in Canada.

When did you take over the company’s leadership?

How significant was this acquisition compared to other moves?

JD: This is the seventh or eighth acquisition that we have made since the third generation bought the company. When we bought the company in 1980 we were doing about $2 million in sales. Now we are budgeting for $34 million sales next year. Every acquisition we have made was strategic, either to gain expertise in a given market or to grow our sales.

Why is Deschamps Impression a unique printing company in the region?

JD: We are the only one doing packaging, security printing and we also do a lot of commercial printing, of course. We have a unique digital printing facility in Montreal. We completely finish about 95 percent of what we print. We manufacture in our facility in Montreal and Quebec City, so we are completely unique. We are one of the largest independent printers in the province of Quebec. We are also the only printer with a complete mirror plant which allows us to guarantee continuous service in case of a force majeure.

Why are you so confident in the future based on all of the investment made over the past year?

We are already in the process of talking with other printers who are more in the packaging market, as well as commercial printing, in the Montreal region. We are a 90-year-old company and we are looking forward to going over 100 years.