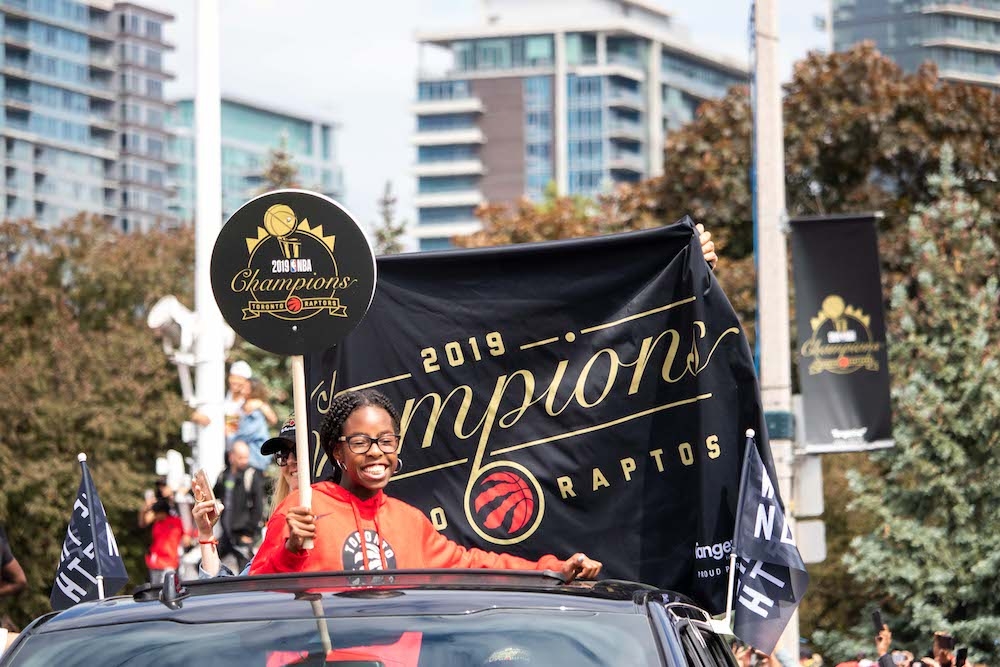 The Toronto Raptors’ success in the National Basketball Association (NBA) June Finals over two-time defending champions, the Golden State Warriors, marked the team’s first NBA championship as well as the first time the series was won outside the United States. The Raptors’ historic playoff run and ensuing championship parade became national front-page news, as Canadians from coast to coast united in support of their country’s sole NBA team.

But those wins were not just triumphs in the world of sports; they also amounted to a victory for Canadian print. The PR and omnichannel marketing genius of the team’s corporate owner Maple Leaf Sports & Entertainment Ltd. (MLSE) was instrumental in arousing widespread interest in the Raptors brand, and print was a major driving force in MLSE’s strategies.

So effective were these strategies that even Canadians who do not typically follow the sport found themselves tracking the Raptors’ progress. Even the July free-agency decision of Finals MVP Kawhi Leonard to leave the Raptors in favour of a four-year US$142-million deal with the Los Angeles Clippers captured the general public’s attention. Using social media as a measure of marketing success, sports management firm Deportes & Finanzas reported the Raptors became the world’s most popular basketball team after its NBA victory — garnering a world-leading 28.9 million Instagram interactions in the month of June. Data from Internet analytics platform SEMrush found the number of Raptors-related tweets grew by a staggering 4,400 percent in Canada after its Game 6 championship victory against the Warriors on June 13, while Raptors web searches grew in Canada by 2,490 percent in the days following the win.

MLSE is jointly owned by Bell Canada Enterprises, Rogers Communications, and Kilmer Sports. In addition to the Toronto Raptors, MLSE also owns the Toronto Maple Leafs and Toronto Marlies hockey teams, the Toronto Argonauts football team and the Toronto FC soccer team, as well as all the venues its teams play and train in, and three specialty sports TV channels. This article brings you a behind-the-scenes look at three diverse print suppliers that produced a select portion of the spectacular media MLSE used in recent months to promote the Raptors brand and its journey to a historic championship win.

Planning and experience
ICON of Markham, Ont., is MLSE’s official supplier of graphics and signage. For the NBA playoffs, ICON printed banners with the Raptors’ slogan, “We The North,” which festooned the CN Tower, the Princes’ Gates at Exhibition Place, the Toronto Eaton Centre, and other Toronto landmarks. ICON also produced signage to decorate the Maple Leaf Square, the public square adjoining Scotiabank Arena where the games are played and the street running into it, Bremner Boulevard. This area, nicknamed “Jurassic Park,” transformed into a lively, outdoor game-viewing venue and was the site of tailgate events organized by MLSE.

For the championship parade on June 17, ICON produced float graphics, banners, mesh scrims and flags for barricades along the parade route, and much of the gigantic signage for the stage, media tower and surrounding area at the parade’s end point, Nathan Phillips Square, which also served as the site of the celebration rally. The company printed all Raptors-related graphics on its five-metre-wide Durst RHO 500 and three-metre-wide Durst 312R UV inkjet printers, and Mimaki dye-sublimation fabric printer.

Within one week, ICON produced hundreds of fence graphics, tens of thousands of large and handheld flags, and vinyl murals as Toronto hosted the largest championship parade in North American sports history.

“The Raptors panorama was an unprecedented experience for us in its scope and magnitude, but we were able to execute it through careful planning in close collaboration with MLSE,” ICON President and CEO Juan Lau says. “Our 18-year business relationship with MLSE and experiences with other sports event management clients have taught us the mechanics of sitting down with organizers in advance to map out a detailed strategy.”

Past sporting events that ICON has been a supplier for include the NBA All-Star Game, the World Cup of Hockey, the International Ice Hockey Federation (IIHF) World Junior Championship, the Major League Soccer (MLS) Cup, the RBC Canadian Open, and the Honda Indy.

In planning the Raptors’ victory celebration, Lau says graphic files were ready several weeks before the outcome of the playoff run had played out, and plans included several different scenarios and parade dates, dependent on whether the Raptors won in Game 5, 6 or 7. ICON also contacted suppliers in advance to make sure enough of the various substrates would be available to complete the necessary printing, if required.

Co-founded by Lau with two partners in 1995, ICON has grown to occupy a 120,000-square-foot production facility in Markham with additional offices in Toronto and New York. It employs a staff of 240 and serves clients through four divisions: ICON Visual for large-format and display graphics; ICON Media for customized digital signage; ICON Motion for content creation, video production and event management; and ICON Print for offset and commercial printing, including marketing collateral and direct mail.

Lau says one of the biggest challenges of its recent Raptors work was co-ordinating multiple projects and production schedules, not only for MLSE but also for MLSE’s 50-some corporate partners, while also completing other client jobs already in progress. The company relied on its seasoned project managers to perform site checks and deliver precise specs and graphic files to the production team as quickly and efficiently as possible. “Our experience in event marketing really pulled us through,” Lau says.

An extra special challenge arose when ICON received notice at 5 p.m. on the Friday before the parade, when much of the staff were preparing to go home, that Drake – rapper and Raptors global ambassador – had decided to enter a float in the parade set for Monday morning. The staff waited until late Friday evening to receive the files and specs needed to produce all the graphics for the float, and a team of installers worked around the clock to mount the parade and street graphics in time for the parade’s scheduled 10 a.m. start. Until then, all the floats were hidden in the OVO Athletic Centre, the team’s practice facility.

Creative flair and flexibility
Based in Bolton, Ont., Motive Media was responsible for wrapping a number of vehicles in the championship parade, including five double-decker buses, 19 Ford vehicles, a 54-foot merchandising trailer, and a vintage Toronto Transit Commission (TTC) bus and trolley, all used to transport the players and their families, team management and dignitaries. The company produced the graphics on both an HP Latex 370 and an HP Latex 570 printer on 3M IJ180MC-10UR (Ultra Removable) substrate. Once printed, the vehicle graphics were laminated with 3M 8519 Lustre Overlaminate using a 65-inch Kala 1650. As well, Motive supplied banners for the Toronto City Hall stage which were printed by a longtime trade partner.

Motive started preparing design files and ordering materials after the Game 3 win on June 5. With MLSE having been a client for over six years, this helped expedite preparations as Motive already had MLSE’s colour profiles saved, but production did not start until more than a week later.

“We got the go-ahead from MLSE on the night of June 13, the minute Game 6 stopped in Oakland, California,” Kate Glassow, National Account Manager, says. “I was nervous because there was so much at stake for us. We had all hands on deck and people working in production around the clock.”

Over the course of 72 hours, the Motive team printed and installed 8,000 square feet of vinyl, completing the job just before 1 a.m. on parade day. By 6 a.m., the vehicles they had wrapped in Bolton were on the road to Toronto.