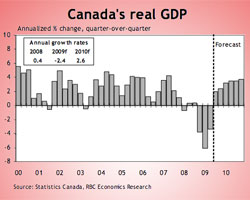 According to a report released today by the Royal Bank, the Canadian economy will return to growth this fall after experiencing a drastic downfall in the last three quarters.

“Improved financial markets, low borrowing rates and fiscal stimulus have moved Canada’s economy forward,” said Craig Wright, senior VP and Chief Economist, RBC. “We expect that Canada’s recession will turn out to be the least severe of the past three, even after the consecutive hefty drops in GDP output from late 2008 and early 2009.”

The projections are based on the trends in the second quarter, which saw the slowdown of the decline. Interest rates are projected to remain low for the rest of the year, with gradual increases in 2010.

A chief driver of the North American upswing will be the automotive sector, especially the increased demand due to the cash-for-clunkers program (GM Canada announced a similar clunker campaign today). The housing market is also growing due to the low interest rates. Wholesale, retail, and manufacturing sales have also seen a modest increase in June, the first rise in 10 months, according to the report. Businesses made cuts to spending plans, but also got easier access to credit.

The full RBC report can be obtained here.