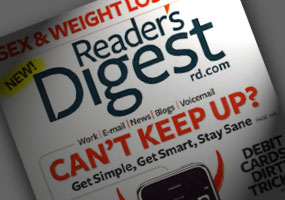 Reader’s Digest’s parent company RDA Holding Co. filed for bankruptcy on Monday after struggling to contain its $465 million debt. This is the second time in less than four years it has done so.
The company says the filing will allow it to cut its debt and keep restructuring. RDA Holding aims to emerge from Chapter 11 within six months.
“After considering a wide range of alternatives, we believe this course of action will most effectively enable us to maintain our momentum in transforming the business and allow us to capitalize on the growing strength and presence of our outstanding brands and products,” said Robert Guth, the company’s President and Chief Executive Officer.
RDA Holdings publishes 75 publications around the world, including 49 editions of Reader’s Digest. In 2011, the company generated $1.38 billion in revenues. In Canada, it publishes Reader’s Digest Canada, Our Canada and most recently announced, Taste of Home Canada.
In related news in the U.S. magazine sector, it has been revealed that Time Inc. may be in discussions to divest a major part of its magazine portfolio. A report in Fortune Magazine (itself a Time Inc. publication) stated that it was aiming for a joint venture with Meredith Corp., another major U.S. magazine publisher.
Time Inc. publishes many of the largest magazines in the U.S. including Sports Illustrated, People and of course, Time. Meredith has 14 titles including Ladies Home Journal, Better Homes and Gardens and Parents magazine. Meredith Corporation, like Time Warner, holds other media interests such as 12 local television stations and a marketing agency.
While no formal details have been announced by either company, Time Warner is expected to keep hold of Time, Sports Illustrated and Fortune magazines while transferring the rest, which includes People, InStyle and Real Simple.
Advertisement
Print this page