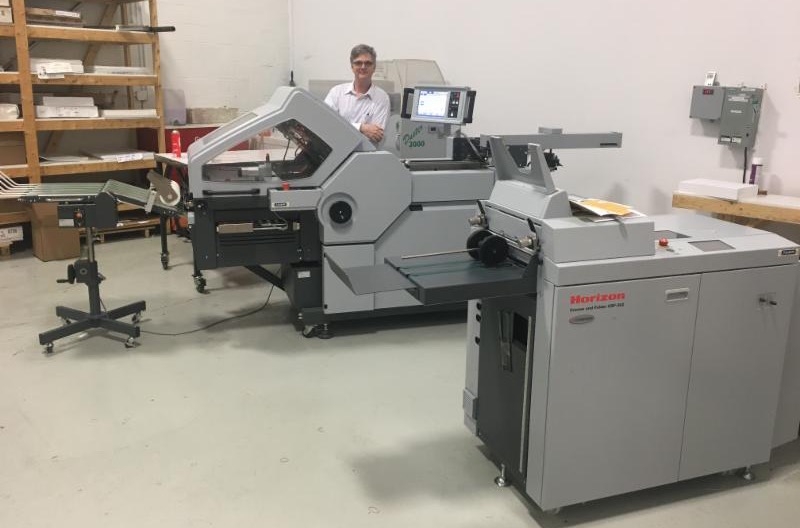 Imprimerie Reflet, a commercial printer based in Montreal, Quebec, has increased its productivity and services by adding two folding systems in the AFC-566FG and CRF-362, purchased from KBR Graphics, the Canadian distributor of Standard/Horizon Finishing Systems.

Founded in 1995, Imprimerie Reflet serves a variety of markets with digital and offset presses, as well as providing a range of finishing options. Four years ago, the company installed an automated Series 9 RMGT offset press, the first RMGT in North America to use UV-LED (UV-LED) instant drying technology. With UV-LED, no drying time is required and the sheets are instantly ready for finishing.

With its capacity increasing because of the RMGT Series 9 press installation, running ultra-light to very thick stocks, Imprimerie Reflet is now turning to finishing investments. “With higher speeds and complete automation, we are now even more competitive in the market,” said Pierre Méthot, co-owner of the Imprimerie Reflet. “Not only are we moving faster and more cost-effectively, but we can now handle more complex tasks.”

The AFC-566FG is a folder that, according to KBR, includes advanced configuration automation, including preprogrammed settings for all commonly used sheet folds and sheet sizes. The folder has been designed for high-speed job changes and the ability to handle scanned sheets without any marking, based on combined roll and groove systems. This low-profile folder is equipped with six folding plates and allows for a range of folding types at speeds of up to 42,000 sheets per hour.

The two-in-one CRF-362 folding and creasing machine is designed to help eliminate cracking on digital print or on difficult substrates, whether thin or thick, varnished or not. Capable of creating up to 10 fold lines per sheet, the CRF-362 uses impact technology that eliminates or minimizes cracks. Grooving and bending can be done in a single pass, explains KBR, for accurate processing of a variety of applications.

The CRF-362 can handle weights up to 400 g / m² and sheet sizes up to 14.33 x 34 inches at speeds of up to 5,000 sheets per hour. “We are now producing complex tasks much more quickly, which is particularly important for us when we are doing short-run digital work,” said Méthot.