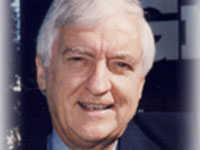 Michael William (Bill) Burke, founder of Toronto-based Grenville Printing, has passed away at the age of 83 after a battle with pancreatic cancer.

Burke was born in Montreal and graduated from Sir George William University (now Concordia) with a bachelor’s degree in commerce. In 1968 he founded Grenville Management and Printing Ltd., which soon became recognized as one of the top printers in the region.

Burke is survived by his wife of 56 years, Dorothy, three sons and eight grandchildren. Condolences can be forwarded via Humphrey Funeral Home.