In early December, Clar Wejnert, a long-standing member of the Canadian printing industry, who was an exceptionally talented craftsman and carpenter, passed away while in the hospital. 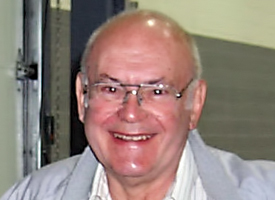 Wejnert spent his entire career in the printing industry, having joined Garden City Printing in downtown Toronto shortly after finishing school. After Garden City Printing, Wejnert joined another downtown Toronto shop in Davis-Cooke Printing, which produced stationary and was well known in the city for printing all of the tickets for Maple Leaf Gardens, including the Maple Leafs NHL team.

As his career progressed, Wejnert became well known in Toronto’s printing community as a masterful craftsman,
working on nearly every type of letterpress cylinder and also repairing them. While printing was Wejnert’s vocation, he was also a very
talented carpenter.

Wejnert’s skill in repairing and maintaining equipment then found him a home with Howard Graphic Equipment, where he stayed until his retirement in 1994. Because of his unique skill set and knowledge, however, he continued to work with the company until this year.

“Clar was much more than a talented pressman, carpenter and repair artist,” says Nick Howard, President of Howard Graphic Equipment. “The world is full of talented people. What really made Clar special was who he was as a person. Always the first to offer help, tireless in his day-to-day life, and giving everyone he met a big smile. The honesty and purity of spirit were fundamental to who Clar was.”

Wejnert is survived by two daughters, Karen and Kristine, along with his grandchildren.