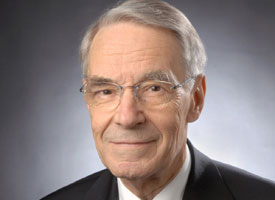 Dr. Hans-Bernhard Bolza-Schünemann, former longstanding President of KBA has died at the age of 84. Born into a family of merchants who had been engaged in the printing and publishing trade in the city of Bremen for many generations, Bolza-Schünemann joined KBA as a design engineer after he gained a PhD in mechanical
engineering at the Technical University in Stuttgart. That same year he
joined Koenig & Bauer in Würzburg as a design engineer.

Over 250 patents bear Bolza-Schünemann’s signature, and
he played a decisive role in major technological advances. These
included the development of a multicolour sheetfed gravure press, the
Rembrandt MT III, in the 1950s, a high-speed letterpress machine, the
Rotafolio, in the 1960s, the world’s widest newspaper press, the
Jumbo-Courier, in the 1970s, and the first Rapida sheetfed offset press,
also in the 1970s, whose 15,000sph output was way ahead of its time.

KBA describes Bolza-Schünemann as a visionary entrepreneur, indefatigable inventor, globally respected master of press engineering and a dedicated patron of the arts.