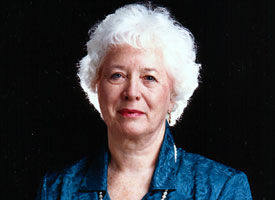 Patricia
Jean Auty, former President and owner of Auty Printing, passed away
in late October after a groundbreaking career in Canadian printing.

Ms. Auty
was thrown into the printing business when her husband, Fred Auty, died
in 1970. She had been working as a teacher, but decided to walk away
from that career to run the family business.

In the early
years of her ownership, Brian Auty, remembers how his mother was often
forced to recruit her brother Don to help in business negotiations,
because men on the other side of the table simply refused to deal with
a woman. He remembers this scenario playing out in both complex deals
for property and even for simply tasks like ordering phone lines.

“It’s
almost laughable today, but it was pioneers like Jean that took the
heat early on in getting women recognized as capable leaders,”
recalls Brian Auty, who worked closely with his mother in the family
business before her retirement in 1992. He later merged Auty Printing
with Mississauga-based RP Graphics, where Brian continues to serve as
part-owner and Chief Technology Officer.

Ms. Auty
was recognized for her business achievements by becoming the first woman
to be inducted into the Promotional Products Association Hall of Fame
in 1988. She was a tireless industry supporter, volunteering for committees
and finally the first female President of the association in 1980. She
was also very active in the CPIA and SGIA.