John Crosfield, one of printing’s modern-era pioneers, passed away last week at age 96. Founding Crosfield Electronics after the Second World War, he became a pivotal figure in developing the application of electronics to all aspects of colour printing. 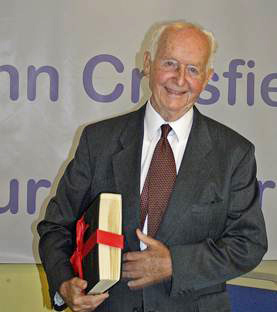 A Cambridge-educated engineer, Crosfield founded his own company in 1947. He initially designed and manufactured printing press automatic control equipment to ensure that the four printing colours registered accurately on top of one another. The resulting product, called Autotron, greatly improved print quality and reduced material waste. Autotron was rapidly adopted by printers around the world.

Crosfield Electronics then played a leading role in the introduction of colour scanning, phototypesetting and later the automated composition of pages incorporating pictures and text. In 1959, John Crosfield then spearheaded the development of the first colour scanner, the Scanatron, which analyzed original colour pictures into their four printing colours and exposed a single colour image onto glass photographic plates for the later production of the four colour printing plates. This technology then morphed into the Diascan with the arrival of polyester-based photographic film.

In 1969, the company introduced the world’s first enlarging and reducing drum scanner, the Magnascan 450. This machine had the ability to make fully colour adjusted and corrected screened, or continues tone colour separations, to a required size, in a single step. These early scanners used analogue and valve electronics. In 1975, Crosfield Electronics launched the Magnascan 550. This was the world’s first digital scanner controlled by computer with all the separation and correction process performed in the computer followed closely by the first electronic page composition system.

Based on Crosfield Electronics’ success, a spin-off company was formed, called Crosfield Business Machines, which developed banknote inspection, counting and sorting machines. John Crosfield and the company’s efforts were recognized with four Queens Awards for both Exports and Technology.

In 1974, John Crosfield sold Crosfield Electronics to The De La Rue Company, which was interested in the banknote handling machines and to understand the colour scanning technology. He continued for many years as a non-executive board member of De La Rue.

In 2000, the John Crosfield Foundation was started as a charitable trust that assists underprivileged young people with bursaries in furthering their education in the Graphic Arts.