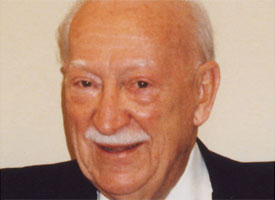 Norman Esch, who was a leader within Canada’s printing industry throughout the 1970s and 1980s, passed away in Toronto on August 25, at the age of 92.

Through his work with historic Canadian companies like Graphic Lithoplate, Rota-tone and Phipps Reproduction, Esch played a major role in shaping the direction of Toronto’s printing market. He founded Graphic Litho-Plate and owned Roto-tone Gravure, along with many other smaller companies.

In the Toronto printing market specifically, he was best-known as a highly competitive and successful salesperson.

Beyond his printing interests, Esch was an avid fisherman who traveled to some of the world’s great fishing destinations: Campbell River in British Columbia, the Tamar River in Devon, England, and the Miramichi River in New Brunswick.

He was also a philanthropist who donated generously to many charities including Trinity St. Paul’s Church in Toronto and created The Esch Foundation. Esch passed away peacefully last Wednesday at Sunnybrook Hospital, surrounded by his family.

Condolences and memories can be posted at Humphreymiles.com.