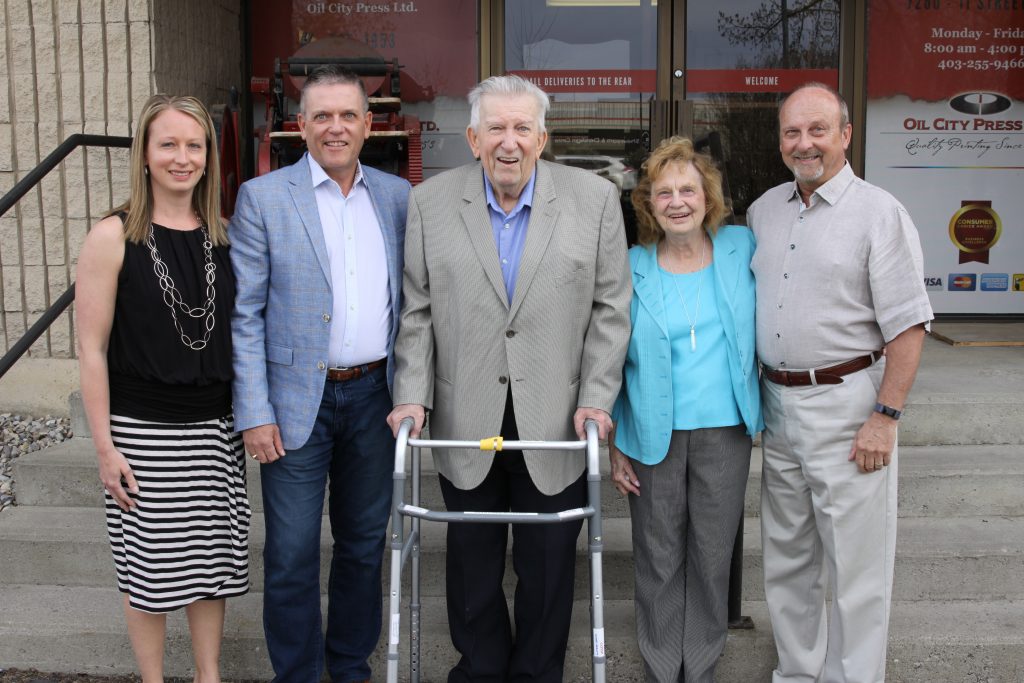 The Kletke family. From L to R: Pamela, Dave, Ron, Linda and Doug.

Born and raised in Winnipeg, Ron relocated to Calgary in the late 1950s with his father, Ron Sr., to work at a printing shop with Ron Sr.’s brother-in-law. In 1963, they decided to venture off on their own, which is when they together purchased Oil City Press. Under Ron’s leadership, the business has made huge strides since the Kletke family took over.

Oil City Press works with brands such as Circle K, looking after all of the chain’s 320 Western Canada stores spanning west from Winnipeg to Vancouver Island, and north to Yellowknife. Its client list also includes the Calgary Flames, Heritage Park, Alberta Children’s Hospital Foundation and the City of Calgary.

On April 22, 2020, Ron passed away at the age of 88 from COVID-19. We spoke with his son, Dave, co-owner of Oil City Press, about his father’s start in the industry and the printing legacy that lives on.

How did your father gain an interest in the printing industry?

My grandfather and my father both worked at Hignell Printing in Winnipeg. My grandfather came from a family of 14 kids and a lot of his brothers were also working in the printing industry in Winnipeg as well. So, it was really the business of choice for our family.

How did the Kletke family come to own Oil City Press?

In the late 1950s, my grandfather was offered to come to Calgary and work with his brother-in-law and become a partner with him [at his printing shop]. So, my grandfather and my father moved to Calgary and started working at Kyle Printing, but found that it didn’t really work out as expected. After a couple of years, my grandfather decided to venture off. They found Oil City Press here in Calgary. This was a one-man operation, and they purchased it together in 1963.

What are some of his career highlights?

In 1969, my mother brought home a carton of cigarettes for my father called Casino Cigarettes from Imperial Tobacco Company, because he loved going to Las Vegas. Casino Cigarettes had a scratch-and-win card in each package. Back then, this was the first real scratch-and-win style of printing that was happening. My dad being a printer was quite intrigued, wondering how they were able to print these cards and put the scratch material on it. So, he opened up each card and you could either win $5 or $100, depending on the numbers that you scratched off on each card.

After spending some time with it, my dad was able to figure out the code of these cards, and along with Bill Volk, another Calgary-based printer and my dad’s musical partner (they played in a two-piece party band on weekends), they cracked the code. They ended up making every news station around Canada and in North America. Imperial Tobacco offered to pay them out if they’d stop winning money with the scratch tickets.

In the meantime, my dad used his winnings to invest into Oil City Press and he ended up building an addition onto the building that we were in which really helped expand the growth of our company.

How has Oil City Press expanded since your grandfather and your father purchased the company?

Over the last 10 years, we’ve really diversified into wide format, signage and have also gone into doing vehicle wraps and outdoor signage. It’s been a great diversification for us and it’s helped us grow. We’ve pretty much doubled our sales over the last five years, and a good part of that is due to going into wide format.

How has Oil City Press been able to switch over to help on COVID-related printing materials for PPE?

A couple of our major customers are in the retail food industry. We do all of the printing for Circle K stores across western Canada. Printing facilities are essential businesses through this pandemic so we’ve been able to help support them with cashier barriers, floor signage for physical distancing, and more, so that has helped us in the sense that we’ve had that the ability with those customers to be able to expand into the retail industry. We’re now able to support the additional restaurants and stores that are re-opening here in Alberta.

We’ve been fortunate to have been able to stay open and help support these businesses. We have been doing some plexiglass shields for inside Uber vehicles and other safety shields on a brand-new Multicam Celero Router Cutter. It’s nice to be able to have the flexibility to be able to adapt to the ever-changing world.

What roles are you and your brother in now as co-owners of Oil City Press?

We’re co-owners, yes, and Doug’s daughter, Pam is the fourth generation of the Kletke family now working for the business. It’s pretty much a group dynamic; we each wear all the hats.

Editor’s note: This interview has been condensed for length and clarity.