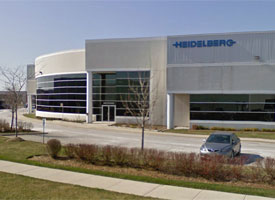 Heidelberg Canada, faced with what it describes as “continued weak demand,” has made considerable cuts to staff and states it will only be closing the demonstration area within its facility on Kenway Drive in Mississauga.

In an interview with PrintAction this morning, Armstrong declined to comment on the specific number of jobs that will be cut at Heidelberg Canada with the restructuring, “I don’t want to get into the numbers, but we have let go a considerable number of people.

“Primary areas that have been affected are administration, marketing, and product management, and areas [where] we can share resources around between the countries. We’ve made some reductions, but we’ve tried to keep the number of service people still strong.”

Press demonstrations, as a result, will be handled through its Atlanta
facility, which is larger. According to Armstrong the rest of the facility, which also houses a
substantial warehouse, will continue to operate and the company structure will remain unchanged, with Heidelberg Canada remaining a distinct entity.

When asked about the rationale behind the restructuring, Armstrong said it was a move to maintain profitability: “The way I see the market out there, we’ve got the economy at work which has really curtailed the amount of capital equipment that’s being purchased, which has impacted us. Also, I see the future having a demand for less machines, primarily due to the fact that the number of printed sheets in sheetfed [which] I don’t see it growing. But I do see that the productivity of our machines, and our competitor’s machines, have really doubled in the last decade, so the sheer mass of printing machines and various other machines is going to be less. So we’re trying to prepare ourselves for a different type of future.”