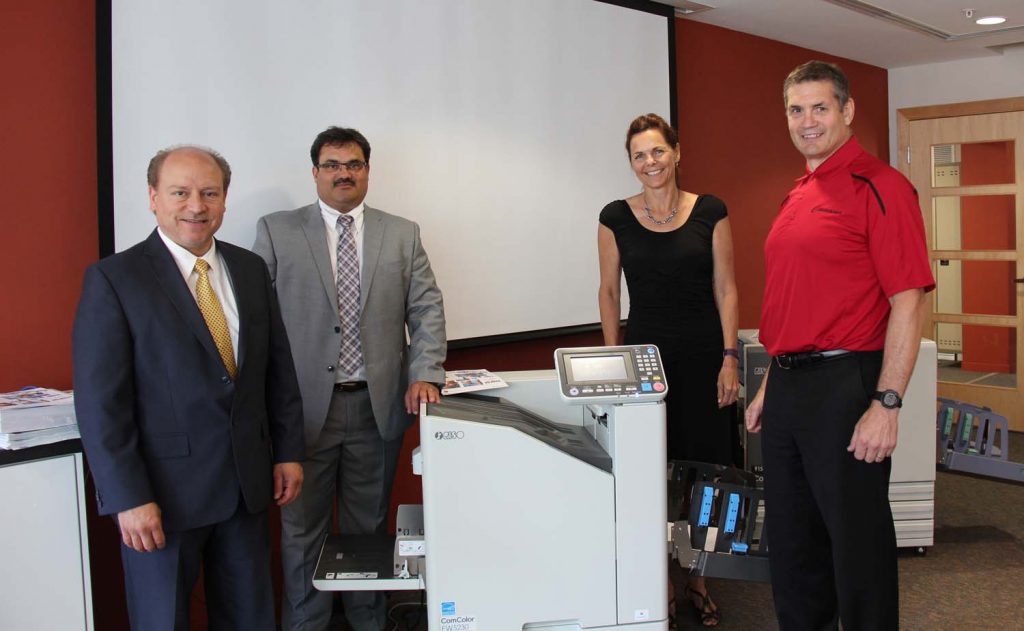 The FW5230 – a fifth genertaion inkjet system from RISO – is aimed at corporate offices where some departments incur heavy print volumes, but it is also suitable for traditional printing facilities like in-plant graphics departments based on its 120-pages per minute printing speed in full colour. The highest-end X1 system hits speeds of up to 150 ppm in full colour. The ComColor FW series, running oil-based pigments in a line-type inkjet system, has a Standard Print resolution of 300 x 300 dpi and a Fine Print mode of 600 x 600 dpi. RISO explains key features of the FW5230 include a new LCD panel (with colour, tilt, and customization), small footprint, embedded RIP, and low-cost printing.

In addition to installations where ComColor devices serve as primary production systems, D’Urbano explains several printers with larger web-bed inkjet machines (costing more than $1 million) are purchasing the ComColor to print short-run or reprint work. Larger web-fed inkjet devices typically require a few hundred feet of paper waste before reaching sellable print quality. D’Urbano noted, even as most toner-equipment manufacturers are now deeply invested in developing inkjet technologies, RISO remains as one of the only large vendors to supply a low-investment cutsheet inkjet engine. At drupa 2016, he explains only a few vendors showcased cutsheet inkjet systems costing just under  $1 million, whereas the RISO systems are priced well under $100,000, typically between $30,000 and $90,000 depending on configuration.

D’Urbano then discussed the advantages of cutsheet inkjet over toner systems, primarily focusing on the lower-cost per page of inkjet (two to three cents, compared to five to six cents for toner), which immediately provides inkjet with a strong Return on Investment position. The RISO systems, as opposed to the traditional click-charge toner model, are also purchased based on a 1/2-cent service contract with equipment users responsbile for buying inks.

During the seminar, D’Urbano also highlighted the no-heat advantages of inkjet printing relative to toner, which traditionally needs to fuse its toner images to paper at around 350 degrees Fahrenheit. The no-heat process of inkjet, D’Urbano explains, provides not only significant uptime benefits, but also an ability to work with a greater range of applications from envelopes to Tyvek materials, because there is no curling of materials from added heat. The FW series, for example, can print 100 fully variable colour Tyvek wristbands, which is growing application for school and promotional events, for a cost of around 15 cents each.

D’Urbano also referenced a range of Energy Star statics indicating, for example, toner-based photocopiers account for 10 percent of all office equipment electricity demand. Again, without a need for heat for the fundamental printing process, the RISO FW inkjet systems run on a regular 110 volt system drawing just 15 amps of power.

D’Urbano also referenced a range of InfoTrend studies about the growth of inkjet printing, including findings that colour inkjet devices accounted for more than one third of all digital colour pages in 2014. According to InfoTrend’s 2013-108 Global Production Printing & Copying Market Forecast, U.S. and Western European digital production colour volumes totaled around 265-billion impressions in 2013 and will surpass 500-billion by 2018.