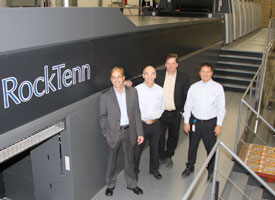 Based in the state of Georgia, RockTenn is focused on paperboard, containerboard, consumer and corrugated packaging. Last year, the company generated sales of approximately $3 billion across 90-plus facilities in the United States, Canada, Mexico, Chile and Argentina.

RockTenn Warwick, which was renamed after Industrie Ling joined the RockTenn group in 1993, remains as one of the company’s most-significant operations. The 450-employee facility will produce approximately 1.4-billion boxes this year, which equates to about 30-million every week.

Since the May 2008 launch of its VLF platform, which also includes the XL 145, Heidelberg has now installed four such presses in North America, with more than 20 installations worldwide.