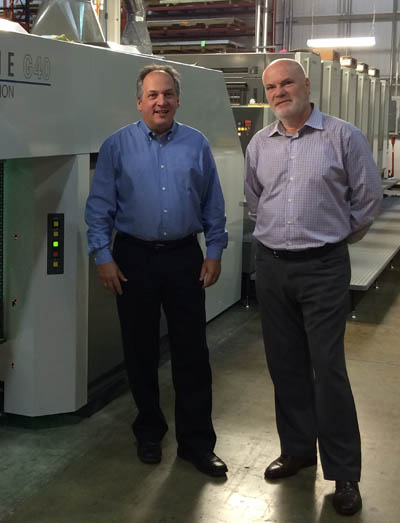 The 40-inch Komori GL, sold by K-North Services, includes a coating and is integrated with UV energy curing technology. The company’s first Komori GL 6c 40, with 60 million impressions, was installed a couple of years ago.

It has been a busy year for RP Graphics, which in September 2014 acquired Rhino Print Solutions’ Toronto operations in what the two companies described as a “strategic alliance designed to deliver coast to coast print solutions.” Rhino’s Toronto facility, formerly Marcam Cross Media, focused on print-on-demand and multi-channel communications.

The installation of the M-Press Leopard began in the second week of January, as RP Graphics was in the midst of creating a new production layout for its 60,000-square-foot facility. A year earlier, RP Graphics stepped deeper into large-format printing with the purchase of 16-year-old Canadian Impact Imaging.

RP Graphics also began a beta-site agreement with Agfa Canada at the beginning of 2014. Agfa Canada builds large-format inkjet systems in a Mississauga plant directly across the street from RP Graphics.