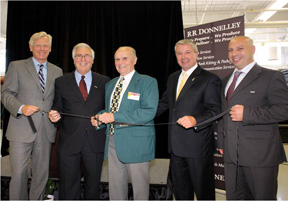 Nearly a year after acquiring the MIL plant assets of bankrupt Grafikom, R.R. Donnelley last week held an open house, attended by some 400 people, to re-launch the financial- and marketing-focused printing facility in Toronto.

R.R. Donnelley (RDD) announced in December 2008 that it had purchased the assets of Grafikom’s MIL facility, based in downtown Toronto. Grafikom, which had six printing operations across Canada, fell into receivership at the end of 2008, without filing for bankruptcy protection, and owed millions of dollars across the printing industry, including over $2.2 million to paper companies, around $700,000 to a number of smaller Toronto-area printers, $400,000 to packaging companies, and more than $900,000 to various finishing operations.

The re-launch of the MIL organization, however, marks new life for one of Toronto’s most-visible printing operations, which is now backed by what many regard as the world’s largest printing company – headquartered in Chicago.

“The re-launch of the MIL printing facility in Toronto complements our existing manufacturing platform, enabling us to provide significant added value to our customers and other organizations that have historically been serviced by the MIL operation,” said Allen Hallis, President of RR Donnelley Canada. “We are even better positioned to provide coast-to-coast print management services and to be our customers’ first choice for comprehensive print communications.”