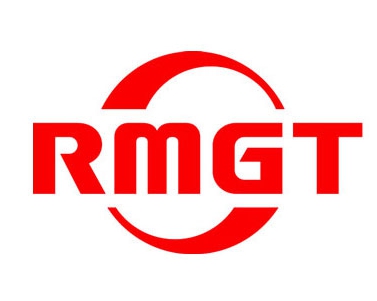 Kozac Takata, Manager of International Sales and Marketing, explained how RMGT was built on integrating the strengths of Ryobi Limited and Mitsubishi Heavy Industries Printing and Packaging Machinery Ltd. These two companies were respective divisions of Ryobi Limited (US$1.9 billion) and Mitsubishi Heavy Industries (US$28 billion) that have manufactured printing presses for over 50 years in Japan. After 20 months, the two companies are fully integrated and will now be known as RMGT.

To ensure that customers worldwide will fully recognize RMGT as a singular corporate entity, Takata introduced new branding that was also unveiled at IGAS 2015 (International Graphic Arts Show) in Tokyo, Japan, running from September 11 to 16. The new logo expresses the joining of two separate companies to form RMGT.

“The explosive growth in sales of new RMGT offset presses in North America is validation of our vision to become a major player in the North American print market,” stated Takata. “In the last 12 months, RMGT has sold more than 30 new presses, which also comprises more than 150 printing units. We are pleased to see RMGT technology changing the business of customers in the commercial print, packaging, and in-plant markets.”

The growth in North America together with other international markets has driven expansion of the main factory facilities in Hiroshima, Japan. A simplified product naming convention was also introduced, as expanded factory facilities in Japan will produce the following lines of presses: 3 Series, 5 Series, 7 Series, 9 Series, 10 Series, and 11 Series.