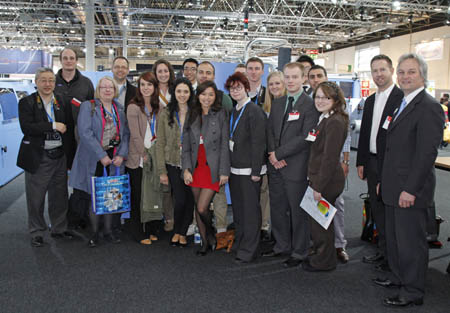 The Graphic Communications Management (GCM) students began their tour of more than 14 exhibition halls with a 45-minute presentation at press maker Heidelberg, followed shortly after by a visit to postpress equipment manufacturer Muller Martini.

“It is very important for the students because it gives them an international view, that printing is more than what is going on in Canada,” says Gillian Mothersill, Associate Dean at Ryerson’s Faculty of Communications and Design, who joins four GCM faculty members overseeing the tour. “It also gives them a great view of where Canada stands in the global print market. I really think it increases their enthusiasm for going back, finishing their degree and finding their place in the industry.”

Twelve of the 14 GCM students at drupa traveled from their home base in Toronto, while two were already in Germany as part of an exchange program with Stuttgart’s Hochschule der Medien printing program. The students visited the school before their drupa arrival.

“The relationship between the Hochschule and Ryerson has existed for over a decade but our official relationship, in terms of sending over exchange students, has been for about two years now,” says Mothersill.