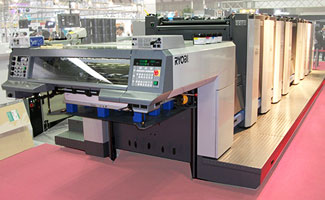 Ryobi displayed its new 928P perfector press at the Japan Graphic Arts Show, which concluded this past weekend. The press was equipped with Panasonic’s LED-UV cure technology and features the company’s new simultaneous plate changers that cut changeover time to as little as eight minutes.
The press, and the entire 920 line (available from four to ten colours), will make its way to Canadian shores via Graphic Systems North America, the recently appointed supplier of Ryobi printing presses in the region. In Eastern Canada, Ryobi will be represented by KBR Graphics while in Western Canada, it will be represented by Canadian Printing Equipment.
“Think about it: world-class print quality, mere minutes of makeready and instant drying in 8-colour, 8-up, 16-page signature print—all at the cost of a traditional 6-colour, 40-inch press with coater,” said Chris Manley, a co-founder of GSNA and owner of Graphco, Cleveland. “It’s no overstatement. Ryobi is restructuring the economics of offset printing today.”
According to Canadian Printing Equipment Vice President and GSNA co-founder Wes McCallum, the 920 series press cuts consumables usage by 25 percent and energy use by 35 percent all while requiring 35 percent less floor space than a standard 8-up press. “Combine that with highly competitive pricing, plus extreme reliability that assures continuous uptime, and you get the lowest total cost of ownership of any press on the market today.”
The GSNA will host a grand opening at its showroom in Atlanta on October 28 and 29th.
Advertisement
Print this page