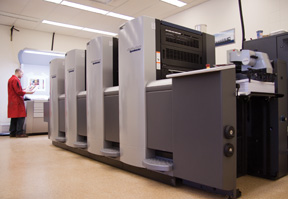 SAIT staff finalized a purchase agreement with Heidelberg Canada at the September 2009 WorldSkills 2009 event in Calgary. The press was then brought into SAIT’s Senator Buns Building over the holidays, under the supervision of a Heidelberg technical crew, for a January 2010 launch.

SAIT’s Digital Graphics Communications program is led by Willem Sijpheer, who, along with the program’s printing instructors, Peter Masch and Jim Drever, will leverage the modern 20-inch offset press to develop more press operators for the industry, particularly in Canada’s Western provinces.

A full report of the press installation appears in the February issue of PrintAction magazine.