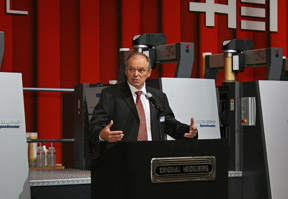 Heidelberg Chairman Bernhard Schreier responded to the collapse of merger talks between his company and manroland in an interview with Frankfurter Allgemeine Zeitung (Frankfrut General Newspaper) today.

When asked why the merger talks failed between the two companies, Scrheier did not answer the question directly, instead saying, “ Let me put it this way, I was extremely surprised at the way the whole thing was reported in the media. In our ad hoc announcement on Friday, we confirmed that sales appear to be bottoming out at a quarterly level of around EUR 500 million, but we predict that it will take a little longer before there can be any talk of a recovery.”

When asked again regarding the merger talks, Schreier was reluctant to acknowledge talks were even underway. “We have not been commenting on speculation and that will remain our policy,” said Schreier.

He also expressed surprise at the reaction from the company’s financial forecast last Friday. “We recorded a positive free cash flow in the second quarter, which means that our position for the year as a whole will be better than the previous year. If anyone feels this can be interpreted as an indication of new risks, I have no comment to make.”

Schreier mentioned that Heidelberg were in talks with Koenig and Bauer, but only regarding possible manufacturing agreements.

When asked whether or not the company will be stepping up efforts to seek a new investor, Schreier said, “We never relaxed our efforts so there is no need to step up our activities in this area.” He also said he was confident the crisis has bottomed out at sales of EUR500 million per quarter and annual sales will return to EUR 3 billion.