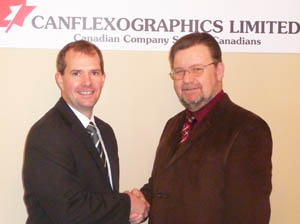 Ron Schroder becomes a Sales Consultant with Canflexographics Ltd., which distributes technologies for flexographic printing and the converting industry. Schroder, who joined the sales team on April 1, 2010, is now responsible for client management and service of the wide-web and narrow-web flexographic markets in Ontario.

Schroder, who has been employed in the flexography field for the majority of his career, is also involved with education in the sector, as a 25-year active supporter of the Flexographic Technical Association (FTA). In 2000, Schroder was awarded the FTA President’s Award for his work on the Flexsys Computer Simulator project. He is currently Chairman of the Canadian Flexographic Training Committee (CFTC).

Canflexographics is based in Burlington, Ontario, under the leadership of President Kelly Roberts. The company distributes and services technologies from companies like AccuWeb, BOBST, Flint, HarperScientific, Harris & Bruno, Mark Andy, and Goldenrod.