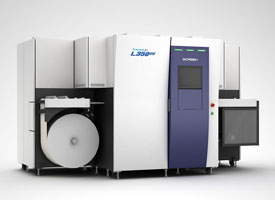 Screen announced it is set at the beginning of October to start selling its Truepress Jet L350UV inkjet-based label system in North America. Screen projects that the global label printing industry is to grow from approximately US$31.5 billion in 2012 to nearly US$40 billion by 2016.
The Truepress Jet L350UV reaches a top printing speed of 164 feet per minute. It will have the ability to connect inline to post-processing devices (an option scheduled for release in spring 2014), such die-cutting and varnish application.
In the spring of 2014, Screen also plans to release an option for security label printing with an ability to output special codes required for Advanced Track & Trace’s SEAL VECTOR authentication technology. This security label product will also provide support for the dot codes used in counterfeiting prevention and distribution management systems.
Screen USA is a wholly owned subsidiary of Kyoto, Japan-based Dainippon Screen Mfg. Co. Ltd., which also owns key inkjet players like Inca Digital. Dainippon Screen first developed the Truepress Jet L350UV in 2012.
Advertisement
Print this page