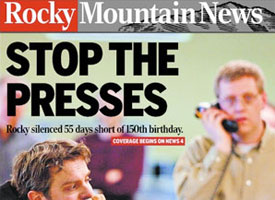 SFGate, the online presence of of the San Francisco Chronicle, has published an article titled Technology And the Death of Print Media. Written by contributor Greg McFarlane, the article contends that print media will soon be “more dead than Rasputin.”
McFarlane states that while it has had a great run of 560 years, technology has made print obsolete as a means of communications: “Given the choice between carrying a static piece of paper that can be cumbersome to navigate, one that becomes a relic the second it’s published, and a dynamic device that conveys information instantly, is it even a question as to which one will dominate the market?”
McFarlane points to the decline of newspapers such as Denver’s Rocky Mountain News as an indicator of print’s looming demise.
Read the full story here.
Advertisement
Print this page