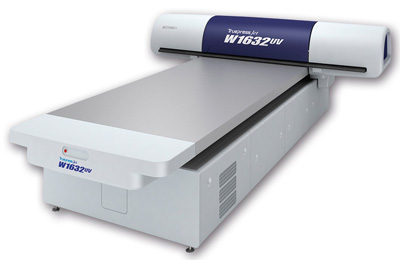 The Truepress Jet W1632UV is the first Screen-branded wide-format UV inkjet printer jointly developed with Screen’s group company Inca Digital. It accepts media up to 62.9 x 125.9 inches and 1.9 inches thick, reaching a maximum speed of 1,011.8 square feet per hour and an apparent resolution of 1,200 dpi.

“Normally, there is a difference between the advertised speed of wide-format devices and commercially acceptable print quality they are capable of producing,” stated Sam Mueller, General Manager of Simpson Screen Print. “We did not want to have to slow the machine down to achieve the quality required for retail signs and point-of-purchase displays.”

“Simpson Print does a large amount of versioning for the various provinces and territories in Canada and different regions of the United States,” continued Mueller. “The Truepress gives us more of a competitive advantage than we were accustomed to with the digital process.”