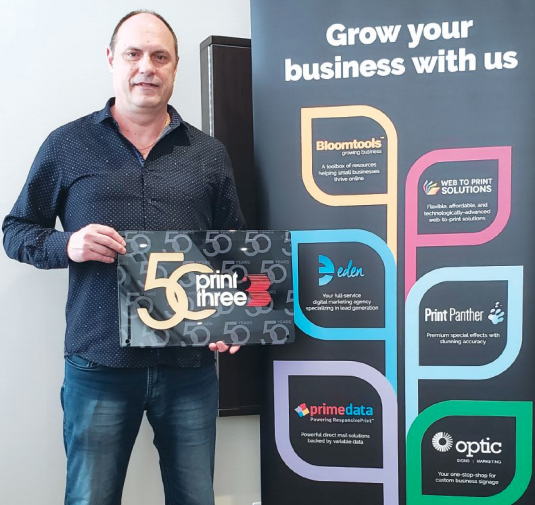 In this era of global competitiveness, very few companies have the opportunity to celebrate significant milestone anniversaries. But Concord, Ont.-based Print Three has been able to defy the odds, celebrating its 50th anniversary in 2020.

At the heart of these types of success stories are the people that make them possible. One of those people is Print Three’s president, Andrew Hrywnak. PrintAction recently had the opportunity to chat with Andrew about the milestone, some of the future plans for Print Three and how it has managed its way through the current pandemic. Here’s what he had to say.

Print Three is celebrating a big milestone this year with its 50th anniversary. Can you share a little about the history of the company and hitting 50 years?

The original founder of the company started the business with one location downtown [Toronto] and expanded to three locations. Since then, they thought about franchising, so some of the people working in the business ended up buying a location and we started franchising across Canada. We have locations coast to coast. The strength in our network is we have many owners that have been with us for 25-plus years. It’s very rare that a Print Three location goes for sale. Typically, they’re passed down into the family. The family will continue running the business, so kids get involved in running the businesses. Everyone that we’ve had as a franchise owner has renewed to stay in the franchise so they can pass that legacy down, or they’ve simply retired and, at that point, sold their business and we’ve started with a new generation of franchise owners.

Can you share any plans for the future of Print Three?

In the last five years we’ve looked at expanding the network again, but we’re doing it through bringing on independents. Right now, we’re really picky in terms of who’s going to be part of the Print Three network. We’re looking and reaching out to independents and other resources that we don’t currently have in the network to join our brand and our network, so that we can offer a full range of services to our customers. We’ve developed from being just Print Three to becoming a true one-stop shop marketing arm that has built in it, during this period, a full-fledged marketing and advertising company called Eden Advertising. We have a full-fledged technology arm that builds our proprietary web products. We also have a web company called Bloomtools Canada, which builds websites and social media marketing… we’ve come a long way from just being a print company.

How has Print Three been able to navigate through the COVID-19 pandemic?

Everyone is in survival mode right now, but we’ve been fortunate enough that we’re so diverse. We are doing work for first responders. We are building safety shields. We are doing signage. We are printing for companies that are building ventilators. People have reached out to us knowing that we’re still around and we’re still open and have these capabilities. We’ve diversified on the print side of it, obviously, because our business is really B2B. Ninety-five per cent of what we do is B2B, we do very little retail whatsoever. We’ve been affected, our stores have been affected, by this slowdown. So, the locations that have diversified into some of those other areas have been really helpful. Prime Data (a recently acquired direct mail company), as an example, is still working with some of our customers because they’re trying to get mail out to their client base letting them you know what their status is: how they’re operating and what they’re doing. We’re still building websites, updating websites, getting involved in creating social media advertising for some of our clients as well. There are other things we’re involved in because we’re so diverse. But if it was just the print side, it would be a problem.

What would you say is the biggest challenge during this pandemic?

The challenge of when our business is going to get back to normal. We’re looking at volumes and I can tell you, we’ll more than likely be less than 50 per cent of what we were doing the previous year. That’s going to be a big challenge for all of us. And it’s just a matter of working with the government programs that are available, so that we can focus and try to maintain staff levels and keep staff employed, because it’s a family. Our concern is not just for the owners, but all of the employees that work for the owners as well; and how we keep them engaged in these trying times so that they know that they’re still part of the family. In our role now, it’s as much giving out information to our network as it is sending out information to our customers – letting them know that we’re still open and we can help in different ways.

This article was originally published in the May 2020 issue of PrintAction. Click here to check it out.