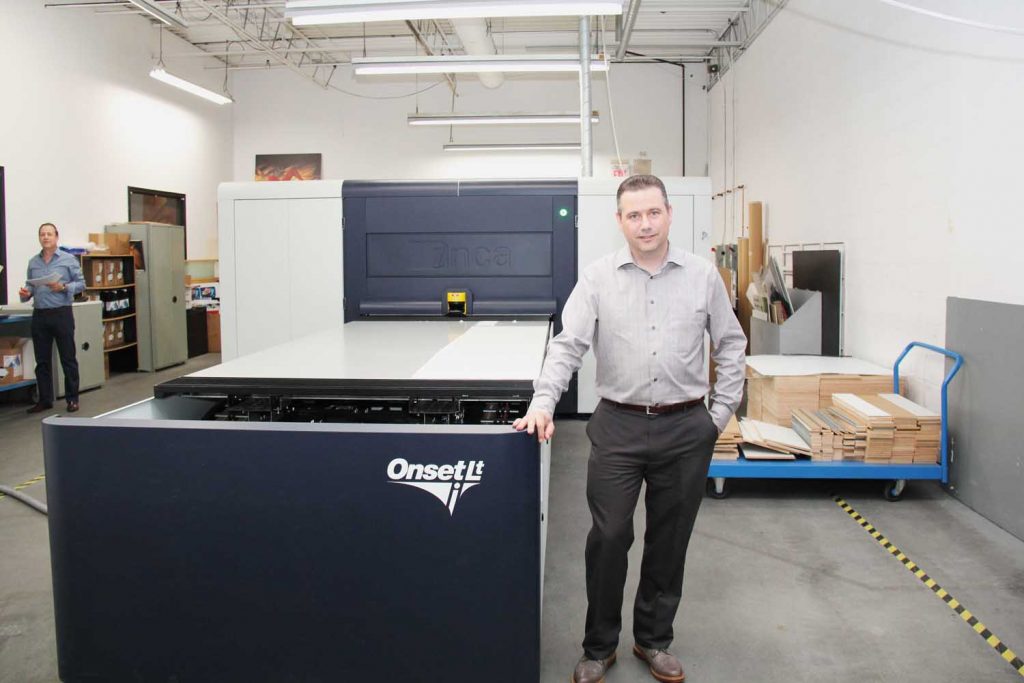 Craig Riethmacher grew up surrounded by the business of large-format printing, with his father being one of the founding shareholders of Middleton Group back in 1952. Middleton today is a unique printing operation in Canada, based on its move into merchandising more than a decade ago and a continuing drive to deliver the rich quality of screen printing through two massive, 4-colour, UV-enabled inline presses, and four single colours.

Middleton was also among the country’s first screen printers to dive into inkjet printing, taking on a 4-bed-per-hour Inca Eagle 44 press in 2005, followed three years later by a 10-bed-per-hour Columbia Turbo. In late-2010, Riethmacher led Middleton’s purchase of a massive Agfa M-Press Tiger press, which produces up to 170 beds per hour.

In March of this year, Middleton replaced its Columbia Turbo, after running it for seven years, with Canada’s first Inca Onset R40-LT UV inkjet press. Before touring the company’s impressive 50,000-square-foot printing plant, Riethmacher sat down with PrintAction to discuss the growth and direction of Middleton Group.

The following article was originally published in PrintAction June 2015 issue.

Historically, what was the largest technology jump for Middleton?
CR: When I worked on the presses we switched from solvent-based inks to UV inks. That was a really big jump, because it just changed everything. It changed all of our equipment and all of our processes.

What were the early days of digital like?
CR: The speed was horrible compared to screen-printing, so it was really limited in the beginning… But it was beautiful when it came out – just so slow. The biggest bonus was the lack of prepress compared to screen.

Why did you invest in the new Inca?
CR: The Inca is so good for us because of the type of work that we do; having to do those thick substrates and edge-to-edge printing and now we can do whites and spot gloss clears, so it is a really good press and it fits our shop.

How much has printing white advanced?
CR: It is great. We are screen printers so we have had that luxury of doing digital and putting a screen ink on the back or vice versa, but you still run into some weird curing issues… We went through a good amount of R&D on that, so to be able to just send in a sheet and have it come out with white on is great.

Will digital inkjet replace screen?
CR: Ten years from now if they keep going as they have in the last 10 years, we are going to be running some pretty speedy digital presses. I don’t think you will ever replace screen 100 percent, but it will get close. I do feel there will always be a place for screen.

What percentage of your work is screen versus inkjet?
CR: We do more digital. I would say probably 60/40. It is very much quantity related too. Larger jobs that are over 500-plus sheets tend to go screen – depending on what the job looks like. Sometimes we will look at the artwork and realize it is going to be very difficult to produce screen, like some jobs with fine light colours that have really low percentage tones where we are going to pull our hair out trying to achieve colour, so we just put them on the digital press.

How important is print today at Middleton?
CR: We are definitely not just a printer anymore with all the permanent display work we do, but we still like to boast that we are a pretty darn good printer. We always have been and I think we always will be about quality. We will take the extra step to make sure our quality is well above average before it goes out the door.

Do you feel the competition of commercial printers getting into wide-format inkjet?
CR: Yes – when we were just screen-printing, it was just us and three or four other big competitors. That became five or six as digital started and now there are people with [digital] in their garages, nipping away at things.

There are so many types of digital. So, what we tried to do here was not become a so-called digital shop where we have other processes like roll-to-roll. We buy digital equipment that compliments our screen print and it makes us a better large-format printer – better at what we do best and what we sell best.

Will you scale up the R40-LT over time?
CR: We have the M-Press, which really pounds out the prints and it wasn’t that we were looking for another print pounder… The LT was perfect for us because it is four times faster than the Turbo. Even at the base model and quality is exactly the same whether you have the full R40 or not. We will definitely be looking to scale up the press moving forward.

How much of your sales is from merchandising versus print?
CR: I would say about a 60/40 split with printing still being higher… Print is very competitive. We are going to get what we can, but if we really want to grow our business we have to grow it on the merchandising side, while still being a great print provider. That is really where our focus is… helping the bottom line.