From the pressroom floor of Harmony Printing, Prime Minister Stephen Harper was in Toronto today to announce a new initiative aimed at reducing the burden of federal regulatory requirements on Canadian enterprises. 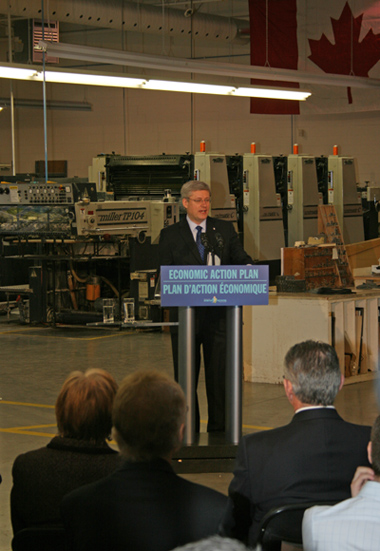 “Small- and medium-sized businesses are a critical driver of the Canadian economy,” said Harper, speaking to a throng of television and newspaper reporters. “This initiative will help ensure that they can grow, prosper and create jobs without being impeded by unnecessary government regulations.”

Harper, along with Rob Moore, Minister of State (Small Business and Tourism), acknowledged how Canadian businesses spend billions of dollars every year to meet regulations. He introduced the Red Tape Reduction Commission (to be Chaired by Moore) that will consult with businesses to “identify irritants that have a clear detrimental effect on growth, competitiveness and innovation.”

Before the announcement, the Prime Minister toured Harmony Printing with company President Don Gain. Harmony has been in business for more than 45 years, while Gain is well know for actively lobbying government on behalf of the Canadian printing industry.

The Red Tape Commission announcement coincides with the second-annual Red Tape Awareness Week, which is a campaign led by the Canadian Federation of Independent Business (CFIB). Catherine Swift, President of CFIB, said, “What promises to set this initiative apart from previous efforts is its focus on making permanent changes to control and reduce the regulatory compliance burden. The fact that Stephen Harper made the announcement himself shows political leadership from the top.”

CFIB estimates that regulations and paper burden cost the Canadian economy $30.5 billion a year, while 25 percent of surveyed business owners indicate they may not have even gone into business if they had known the burden of complying with regulations.