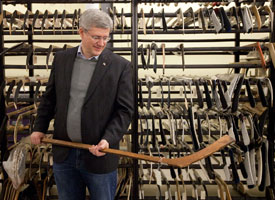 A governmental policy meant to protect Canadian publishers has instead caused the publishing of Stephen Harper’s upcoming book to go to the U.S.
According to The Globe and Mail, the Prime Minister’s book will be published in the United States instead of Canada because of “prohibitions embedded in the government’s own cultural policy.”
The book, a history of professional hockey, was awarded to U.S. publisher Simon & Schuster because of their willingness to distribute throughout North America. Current government policy, the Investment Canada Act, forbids foreign companies from publishing books in Canada, but allows publishers outside to distribute in this country books published by foreign publishers in their home territories.
The U.S. publisher was chosen by Toronto lawyer Michael Levin, who brokered the deal and claimed the Prime Minister had nothing to do with its arrangement. The book will be released in November, with author royalties going to Military Families Fund of the Canadian Forces Personnel and Family Support Services.

“Canadians from all walks of life enjoy cheering on the great heroes of our national game, but it wasn’t always that way,” writes Harper in a statement announcing the book’s release. “The early days of professional hockey featured outsized personalities who fought pitched battles to shape the game we know and love today. Writing this book has taught me a lot about hockey and a great deal more about Canada. I hope all who read the book enjoy it as much as I enjoyed the experience of writing it.”

Advertisement
Read the story at The Globe and Mail.
Print this page